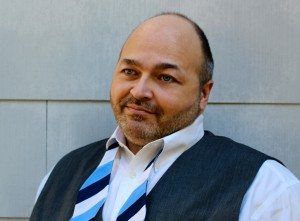 Originally from Chatsworth, GA, Russell Martin, tenor, has remained active in music and theatre since middle school, becoming the first person in Murray County to participate in 6 years of GMEA All State Choruses. He joined the Atlanta Symphony Orchestra Chorus shortly after graduating high school, and went on to receive his Bachelor of Music in Voice Performance and Music Education from Northwestern University, Evanston, IL, in 1992. He has performed with the Chicago and Atlanta Symphony Orchestra Choruses, participating in many critically-acclaimed and Grammy Award winning performances, singing under the baton of world-renown conductors such as Robert Shaw, George Solti, Pierre Boulez, James Levine, Yoel Levi, Daniel Barenboim, and Zubin Mehta, in some of the United States’ greatest venues. His favorite theatre performances include Che Guevara in Evita, Nicely Johnson in Guys and Dolls, Charlie Brown in You’re a Good Man, Charlie Brown and three diverse roles in The Elephant Man. He has enjoyed many years as a voice teacher, high school teacher, soloist, conductor, as well as a professional ecumenical singer in Chicago, New York City, and Atlanta. Other favorite memories include performing with the ASOC at the 1996 Olympics in Atlanta, singing at Carnegie Hall and Lincoln Center, and appearing on Wheel of Fortune in the early 90s. He now hopes to continue his teaching career here in Savannah, where he attends St. Peter’s Episcopal Church and also sings in the Savannah Philharmonic Chorus.