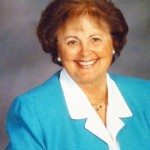 Peggy joined I Cantori in 1996.  She holds a degree in Music Education from Ohio Wesleyan University, a Masters degree from the State University of New York, and taught music for over 20 years in New York public schools and the State University system.  She has sung under many well-know conductors, including Seiji Ozawa, John Rutter, Eugene Ormandy, Robert Shaw and James Levine.  Peggy herself has served as a guest conductor of New York State School Music Association choral festivals.

Peggy is a member of Music Educators National conference, American Choral Directors Association, American Guild of Organists, NY School Music Association, the American Orff Schulwerk Association, and the Choristers Guild, which has published several of her original compositions and arrangements.

In addition to I Cantori, Peggy is a member of the Savannah Philharmonic symphony chorus and is a retired director of Music at Skidaway Island United Methodist Church.  She is married and has 3 adult sons.